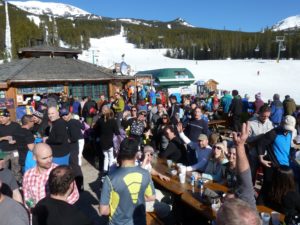 It was an early morning for the BOMA ski trip newbies and survivors. All the sleepy-eyed BOMA ski bums showed up at COP on time, including the bus drivers! We were all set and ready for the day of skiing and adventures ahead of us. It was questionable as to the conditions of the hill as the weather had been unusually mild lately, but we knew no matter what, it would be a great time. It’s always a good time with BOMA!
The bus ride up was rather quiet, probably because most went back to sleep. Once the special coffee and doughnuts were distributed, the crowd became more chipper and was ready to hit the hill. The first half of the day on the hill was slightly icy, but at least we still had some snow! We had lunch on the backside of the hill and some members attempted to eat the huge double burgers that were served. It was at lunch that ski stories started. “I saw someone ski through a fence, I wasn’t sure if it was someone from our group” to “ my shoulder is a bit sore, I skied through a fence”. Oh dear, I would hope that we would all go back in once piece, but now that is questionable.
The second half of the day really started to look up. The sun was out and had made the snow on the front side softer. We were getting more daring with our skiing abilities. The one time my ski group decided to let me choose the route and I accidentally took the moguls. Someone ended up skiing on their back with their skis in the air while others decided to slide on their stomachs most of the way. It was safe to say that I lost my role as leader and my wallet would take a hit to win them back with drinks.
At the end of the ski day everyone met back up at the Kokanee patio at the base of the hill and socialized. It was a great time to make new BOMA friends and talk about the day. The conversations and beers were plenty. Around 5 o’clock we were all redirected to the lodge for supper. The buffet was excellent as well as the company. It was hard to leave and head back to the bus, but that was our only ride home. Back to Calgary we went!
All in all, it was an arm breaking good time! (she actually didn’t break her arm, just pulled a tendon for those who were wondering). I highly suggest joining us next year for those that missed it in the past! Just don’t let me choose the trails. And for those that came, I hope you all had a great time, made new friends and went home with many stories. Till next year BOMA ski crew!
Contributed by BOMA member