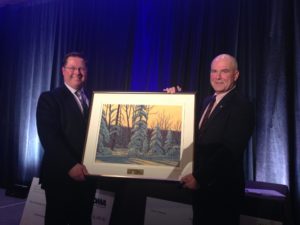 On December 11, over 700 members of the BOMA Community gathered at the Westin Calgary for the annual BOMA Calgary Christmas Luncheon. The festivities included donations to the BOMA Calgary Foundation from the proceeds of the 2014 BOMA Golf Tournament and from Board Member Fred W. Edwards. Attendees were also treated to a performance by comedian Trent McClellan. The highlight of the event however, was the farewell to retiring BOMA Calgary President and CSO Bill Partridge.
Bill has served the BOMA Community and represented its member’s interests for the past 34 years. He has worked with six different Mayors and has seen this city, and the BOMA Calgary community, grow immensely during his tenure. In celebration of Bill’s extensive contribution to the industry, Ken Dixon, BOMA Calgary Board Chair presented Bill with a painting from artist William Duma, depicting the Alberta wilderness in which Bill has always found much enjoyment.
On behalf of BOMA Calgary, we extend our gratitude to Bill for his years of extraordinary contribution to the BOMA community, the industry, and the city of Calgary.
Best wishes Bill for a happy and fulfilling retirement!
Posted on behalf of the BOMA Communications Committee