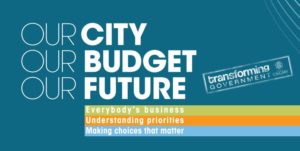 What is the proper role of government? What services should they provide, and what should they leave to the private sector? These questions have plagued policy makers for as long as societies have been organized into governments.
In Canada we live this question each time a level of government presents and considers a budget.  In the last week of November the City of Calgary considered their 2014 Budget. Budgets are at the heart of what governments are tasked to do by voters – make decisions. These decisions are rarely easy, but Budgets present a particular challenge. In order to lower taxes, city expenditures must also be lowered – the lost tax revenue must be offset somewhere. On the flip side, providing new services or infrastructure requires the City to find money it didn’t previous have – either by new taxes, or finding savings within the services they already provide.
So what should guide councillors in deciding where to say yes and where to say no to funding services? The answer lies in the concept of “public goods”. A public good has two characteristics – individuals cannot be excluded from consuming the good, and one person’s consumption of the good doesn’t take away from the ability of someone else to consume it. Think of police services. The benefits of public safety are difficult to exclude from certain individuals, and a safe city benefits everyone even if they have never called 9-11. Because everyone benefits, and because private police services would be hampered by the free-rider problem, it is more practical to pay for this from taxes.
Police services are an example of a pure public good, but most services governments provide have some elements of a public and a private good. For example, a park can have an entry gate where you pay for its use, and certainly if enough other people decide to go a park at the same time you do it does affect your ability to use it. However, it can be argued that green space has benefits even to those who never enter them, and it may be impractical to have to pay every time you want to walk through a park.
The important point is that public goods theory forces us to ask ourselves the question of who can most efficiently provide a service. For private goods, Governments have no benefit over private companies. Because governments generally pay for services from general tax revenue, a private good delivered by a government will lead to a cross-subsidization, as those who don’t use the good, pay for those who do. Why should people who prefer to play soccer be forced to subsidize my green fees at a City owned golf course? A private company does not face this problem when providing a private good because they operate on a user pays system. If you don’t want to pay for greens fees, don’t play golf. However, Governments do have an advantage over the private sector in providing public goods because the inability to exclude (and therefore collect payment for the consumption of a good) can be overcome through a government’s ability to tax.
So when considering the Budget, Councillors should consider what type of good they are being asked to provide, and based on that, ask why would it be more efficient for government to provide it? The key to more efficient public services that Calgarians rely on is ensuring that the City doesn’t overextend itself in areas where the private sector already serves and has the competitive advantage.
*photo from City of Calgary site