(Note: These views are my own and do not necessarily represent the views of BOMA Calgary.)
If you, like me, have ever ridden your bicycle into downtown Calgary, you know very well that you are taking a significant risk, given the sheer volume of traffic on the city’s streets and avenues. There has to be a better way.
I have personally seen the segregated bike tracks in Vancouver and in Washington D.C. during several trips to each of these two cities.  On the surface they look as if they will provide benefit to cyclists. 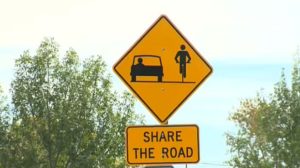 Bike lanes physically separated from the heavy vehicular traffic will certainly generate a much safer cycling environment by putting a barrier between drivers and bike riders. This should translate into fewer incidents and associated injuries amongst bike riders with commensurate savings to an over-taxed public health care system.  There may be some benefit to pedestrians as well, as cyclists will tend to ride less often on the sidewalks.
Also on the positive side of the ledger, with dedicated bike lanes the stage is set for better compliance by cyclists with traffic signs and signals.
It should work.  Some studies (Portland, OR) suggest that bike riders will go out of their way to ride on a street with good bike infrastructure.
Overall it sounds pretty good.
But wait. Here in Calgary, drivers are frustrated by the cyclists – most often couriers – that flout every traffic law on the books.  Cyclists claiming the right-of-way in pedestrian cross walks are one big contentious point.  Riding between lanes of traffic while not just illegal is downright dumb.  Personally, I have seen cyclists failing to stop at stop lights and signs, riding the wrong way on streets and avenues, riding on the sidewalks nearly mowing down pedestrians on some of the regional pathways. And the list goes on.
Referencing my many trips to both Vancouver and Washington, mentioned earlier, my non-scientific observation was that cyclists were not using the bike tracks but rather they were riding in the vehicular traffic lanes and doing just fine.
Don’t get me wrong.  I ride a bik 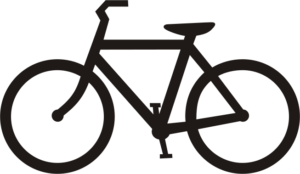 e. And at times when the mood suits me and the weather is good – I am a bit of a wuss in that department – I will ride my bike to work.  It is 10km door to door and takes me a little less than half an hour.  After all I am no Lance Armstrong.  The office building I work in has locker, shower and change facilities, as well as a secure bike room.  I choose the regional path system as the best route, as the roads in the SW quadrant of the city are simply not conducive, or safe, for bike riding.
Calgary has a very well developed pathway system which is fun to use. But it is a recreational system and not a commuting system.  As a result, commutes take a little longer than they might otherwise on these purpose-built pathways.
So what can we do to improve things? I think the best approach is to be sensible, rational and equitable.  Having a comprehensive transportation plan that addresses the unique needs of all modes is a good start.  Calgary has a tendency to address components of the system in an ad hoc and segmented fashion and this approach doesn’t always yield the best result.  Certainly we need to depart from an approach driven more by ideology and make fact-based, evidence-based decisions. These tend to be better decisions.
An overall plan needs to address education aimed at improving behaviour, and enforcement should be a key component of a broader education process. And I know this will not be popular with cyclists: Calgary needs to implement a bike licensing system.  User pay systems are acceptable when applied to other forms of transportation, e.g. bus fares, vehicle registration fees, fuel taxes, etc., so this should not present a rational or philosophical objection. The bike license fees could be encumbered to the extent that they may only be expended on bike-related things like education programs, cycle path improvements and the like. A licensing system would benefit bike owners and aid in the recovery of a lost or stolen bike.  And for the pedestrian or the driver faced with some infraction on the part of a cyclist could use the license number as and enforcement aid and in reporting an alleged offense. As one who rides, I do not object to a bike licensing scheme or to a fee associated with one.
Those who resist a user-pay system and want bike paths and bike tracks to be subsidized only admit that they prefer other people to pay for them.  This is not a reasonable approach.