By William Partridge (with Lloyd Suchet)

(Note: The opinions stated in this blog are solely my own. These opinions do not necessarily represent the views or the position of BOMA Calgary.)

There is no question the growth of Calgary’s population has been very significant. When I arrived in this magnificent city the demographic clock had just ticked over the 400,000 mark. That was in the early 1970s. In 2014 we are perched at just under 1.2 million.
Calgary’s growth rate, according to the census data, grew by 10.9% between 2006 – 2011. But what is happening around us? I have always thought that growth in the surrounding “bedroom” communities would be similar to that of Calgary’s. The numbers give a different impression.
While not all municipal data seems to be available, we do see some interesting trends. While Calgary’s 2013-2014 growth was 2.9% (2006 – 2011 was 10.9%) look at what is going on in the surrounding region*: 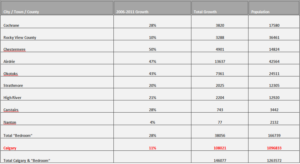 While simply one metric*, these percentage changes suggest a trend. The relative rates of growth in the surrounding communities exceed the rate of growth of the city itself. What conclusions might we draw from these numbers?
Some current statistics* from the most recent municipal census tends to support this trend:

Here are some thoughts:

If these trends continue could Calgary become like Detroit? Will more taxpaying entities depart Calgary because of perceived high costs? Or will Calgary city council acknowledge the need to compete and become more efficient in delivering its services?
So what should we be doing?
I believe, first and foremost, it is important to keep eyes on the big picture. The Calgary Metropolitan Plan is a good start – if it is followed. If municipalities collaborate on the major infrastructure issues and plan, physically and fiscally, for these hugely expensive projects, there is a better chance of a good result for population of the region, as well as equity in sharing the costs across multiple jurisdictions.
I do worry somewhat about the prospect of Charter Cities and the associated review of the Municipal Government Act. If the major cities are granted additional or special revenue powers then it is possible that the competitive aspect amongst the municipalities in the region may actually intensify. That would not serve the regional population well.
Perhaps the most important thing to consider is that growth is a regional matter and requires regional solutions. The municipalities must recognize it is not about them, it is about the people that they purport to serve. It is a difficult task and I don’t envy the decision makers. But policy must be driven by solid information and not simple ideology.