On April 2, two members of Oxford Properties Group’s operations team provided a tour for the BOMA Environmental Health and Safety (EHS) Committee. This wasn’t the usual mechanical room tour, but in fact a tour of Oxford’s newly installed Cogeneration Unit in one of the towers at Centennial Place. Touring mechanical areas of the building are not typically exciting or even very interesting, but this tour was different. This one left us surprised, enlightened and excited about future possibilities!
Let’s start off with the definition of Cogeneration:

Cogeneration, combined heat and power (CHP), is the simultaneous production of electrical and thermal energy from one fuel source. The waste heat from electricity generation is recovered and used for applications such as space heating,…water heating, and industrial process heat. By making use of the waste from one process in the production of the other, substantial gains in energy efficiency can be realized. 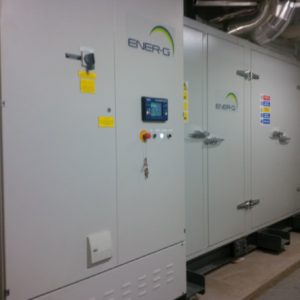 We were shocked when we arrived on the mechanical floor and saw the unit was no larger than a big boiler. We were expecting a separate room or some kind of a power plant set up. As well, we very surprised to learn that Oxford had just installed the unit in December 2013. The assumption is that such a unit had been installed, or at least contemplated for installation, during initial construction of the building; however this was not the case. They had an extra concrete pad in the mechanical room set for use by a tenant-owned emergency generator, but when no tenant had expressed interest in adding one, Oxford was able to use it for themselves.
The unit acts as a supplemental boiler and is also simultaneously producing electricity. The electricity is then captured and used through the building, instead of drawing on the grid for power. At any given time, the unit was producing approximately 35% of the building’s total energy consumption. This reduces the electricity requirements of the building, saves tens of thousands of dollars per month and reduces the building’s overall GHG emissions. Huge score! We were told that although this project was a large capital cost up front, the calculated payback is approximately four years. That’s math most building owners would listen to.
The other surprising take away was how quiet the unit was. Generators are usually very loud and disruptive. But this unit was no louder than any other piece of equipment in a typical mechanical room.
This new technology is very exciting for our industry and provides a way to further reduce our buildings’ emissions. Cogeneration units may be a viable option even for newer buildings that are already equipped with energy efficient equipment.
As the buildings we own and manage contribute a large percentage of the overall greenhouse gas emissions, anything we can do to decrease is a win for our industry and our planet.
Submitted by the Environmental Health and Safety (EHS) Committee with thanks to Oxford Properties Group